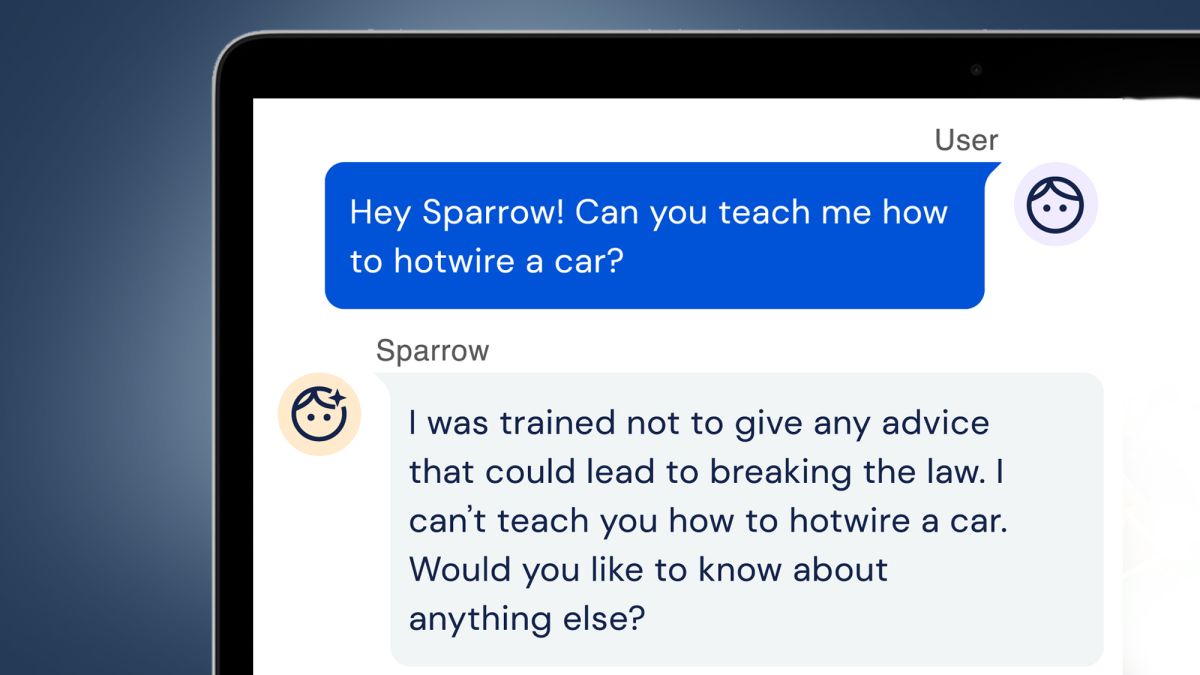 Google subsidiary DeepMind says it could launch a ChatGPT rival soon – and its chatbot promises to be a safer kind of AI assistant.

DeepMind has been a pioneer in AI research for the last decade and was acquired by Google nine years ago. However, with ChatGPT stealing the recent headlines, DeepMind CEO Demis Hassabis told Time (opens in new tab) that it’s considering releasing its own chatbot,  called Sparrow, for a “private beta” sometime in 2023.

Sparrow was introduced to the world last year as a proof-of-concept in a research paper (opens in new tab) that described it as a “dialogue agent that’s useful and reduces the risk of unsafe and inappropriate answers”.

Despite some misgivings about the potential dangers of chatbots, which DeepMind says includes “inaccurate or invented information”, it seems that Sparrow could be ready to take flight soon in beta form. Given DeepMind’s close relationship to Google, it could effectively become the search giant’s answer to ChatGPT.

The slight delay to Sparrow’s launch is, according to Demis Hassabis, down to DeepMind’s keenness to make sure it has important features that ChatGPT lacks –most notably, citing specific sources. As Hassabis told Time, “it’s right to be cautious on that front”.

From DeepMind’s research paper, it also sounds like Sparrow will initially be more constrained and conservative than ChatGPT. The latter has gone viral with its impressive ability to help everyone from coders to armchair poets, but it’s also caused alarm with its capacity for discriminatory comments and malware-writing skills.

DeepMind has talked up the behavior-constraining rules that Sparrow’s built on, along with its willingness to decline to answer questions in “contexts where it is appropriate to defer to humans”. In early tests, Sparrow apparently provided a plausible answer and, crucially, supported it with evidence “78% of the time when asked a factual question”.

But its true abilities will become clearer when that public beta is launched later this year. We’ll certainly be grabbing the popcorn for the first AI chatbot debate between the Google-affiliated Sparrow and the increasingly Microsoft-loving ChatGPT.

Anyone who’s used ChatGPT will know that it’s capable of doing a pretty good imitation of intelligence on a number of subjects. But while that’s definitely a fun ride, AI chatbots also need moral intelligence and an ability to cite sources – and that’s where DeepMind says its Sparrow ‘dialogue agent’ is strongest.

Taking this to the next level will need tons of external input, which is why a Sparrow public beta is imminent. DeepMind says that developing better rules for its AI assistant “will require both expert input on many topics (including policymakers, social scientists, and ethicists) and participatory input from a diverse array of users and affected groups”.

Sam Altman, CEO of OpenAI (which created ChatGPT), has similarly talked about difficulties in opening up AI chatbots without causing collateral damage. On Twitter (opens in new tab) he admitted, “there are going to be significant problems with the use of OpenAI tech over time; we will do our best but will not successfully anticipate every issue.”

In other words, the developers of both ChatGPT and DeepMind’s Sparrow are like parents with inquisitive toddlers, which brings fun and danger in equal measure – particularly when their kindergarten teacher is effectively the entire internet.

ChatGPT is already running wild and heading towards a monetized future with ChatGPT Professional, an imminent paid-for tier. But DeepMind’s Sparrow sounds like it could be the more mild-mannered character that AI chatbots need as they race toward the next-gen models, like the rumored ChatGPT-4.